Now that you know the basics of Git and have started working on the repository with a few commits, you might ask yourself, "How do we visualize these commits and changes we have made in the repository?"

This is where this chapter, and the subsequent (Git Diffs), come in. These commands give you a way to visualize the commits and changes made in your Git repository.

TLDR: The command git log and its corresponding optional flags lets you look at the history of commits and how they link up in your repository.

At the end of the chapter, there will be links to additional resources and more visual GUI tools you can use to look at the log of the repository. However, I still suggest reading and understanding how git log works as these tools still rely on the basic git log to generate their graphs. Having an understanding of this command gives you an intuition for how these tools work in general. Additionally, as the command comes with Git, there is no additional setup required to start using git log.

Note: this chapter serves to show you and explain the common use cases for the command. For a more detailed explanation, look at the additional resources or the documentation of the command.

Note: Assume you are teammate A

Let's say at this point you have added some code and commits to the project and want to see what commits you had done.
This could be because, you wanted to see where you left off yesterday or how many features have been completed. (The latter reason is when you are working on a larger feature)

Well to look at all the commits made on your current branch you can do: 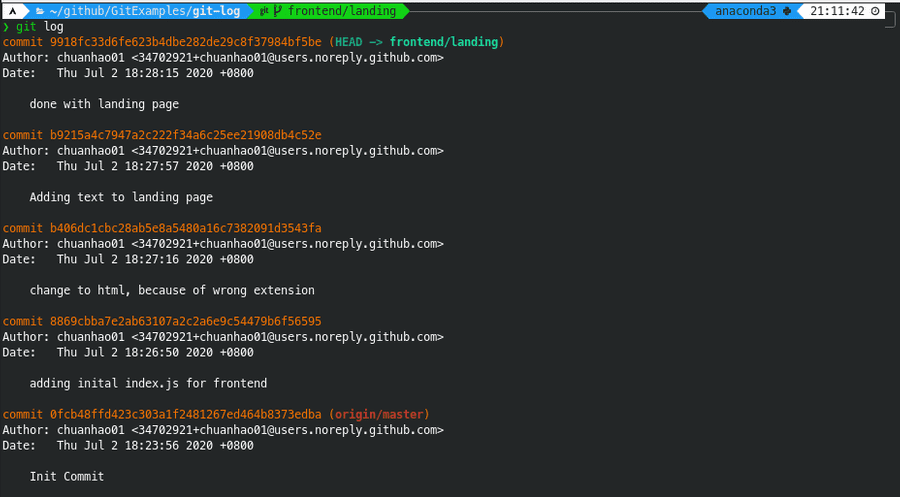 From this screenshot you can see that although we can see all the commits linked to our current branch, there is a bit too much information at once.

For example, information like when the commit was made or who made it is not really important when trying to look at the bigger picture.
This is also not practical when looking at projects with 10s or 100s of commits, as we would be lost in the information

Luckily there are special flags we can use to format the output.
If we add the flag, --oneline, git will shorten each commit to oneline, only preserving the important information.
Looking at the man page for this command:

Thus when running the command.

But there is something weird here...
We can see that there is a commit tagged with origin/master, along with the commits of our current branch, frontend/landing. As we have established previously in chapter 6, all branches start off somewhere. In this example, the branch frontend/landing branches out from the origin/master branch. As such, git log makes a reference to this.

Luckily, we don't have to imagine these relationships between branches and commits as there is a flag that provides us with that visualization.

(Try this out yourself and see what happens!)

The --all flag shows the git log, including all the commits from every branch you have in the repository.
We will also be combining this flag with all previous flags to get the best overview of a project. (In our opinion)

Now we can see that our frontend landing page feature (frontend/landing branch) has already been merged down to the master branch of our local repository. Using git fetch (to fetch any changes from GitHub), we can see that teammate B has also made more commits on his feature branch and the local backend/start-server branch is behind.

For a detailed explanation on how to read the graph, you can refer to these Stack Overflow answers:

As mentioned above, below are additional resources. 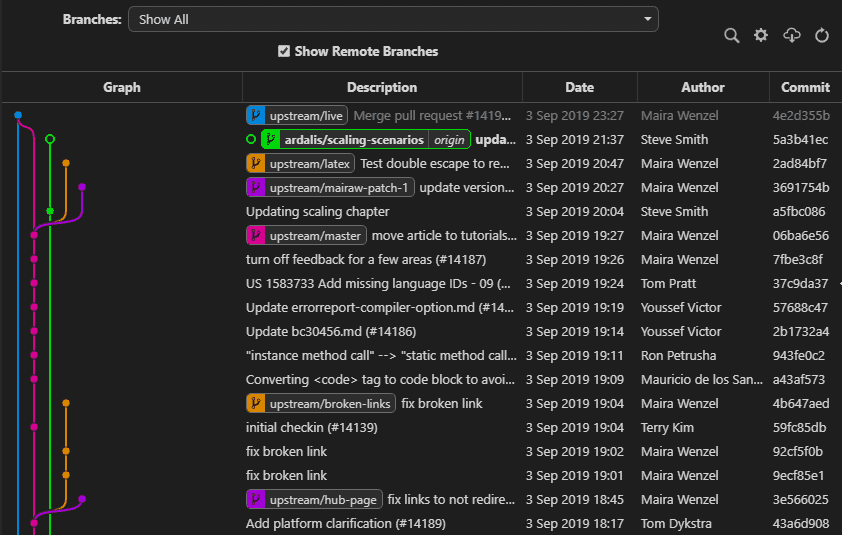 Actually there is a feature on GitHub that also allows you to visualise the graph of your repository.
It is under Insights → Network in your respective GitHub repository.