Merge conflicts occur when the same line of a file is modified by two sources and these sources are attempting to merge with one another. They often occur when the line change is made before the latest changes have been pulled.

When member A tries to pull from upstream, they will encounter a merge conflict informing them that the same line in the file has been modified in two sources.

While Git is powerful, it does not know whose changes to keep and whose to throw away, so it is up to you to inform Git which are the changes that should stay and which should go.

For this mini-practical, every member should try simulating a merge conflict one. It is best to perform the following set of steps as one and only repeat them after the other person has completed it.

It is up to member A to fix this merge conflict on their end now.

Now to fix the merge conflict, open the file in question (names.txt) and you will notice that at the top of the file (or whereever the conflict happened), there will be an odd notation:

Between <<<<<<< HEAD and ======= resides member A's changes. Between ======= and >>>>>>> fc844c137e0f6b7ead645f11c0b24f08c51b5202 resides the owner's changes or the incoming (pulled) changes. To fix the merge conflict, you will have to delete these markers and the content you wish to remove. For example, member A may wish to keep the owner's changes and discard their own, so they will delete everything else between the markers except the owner's changes. 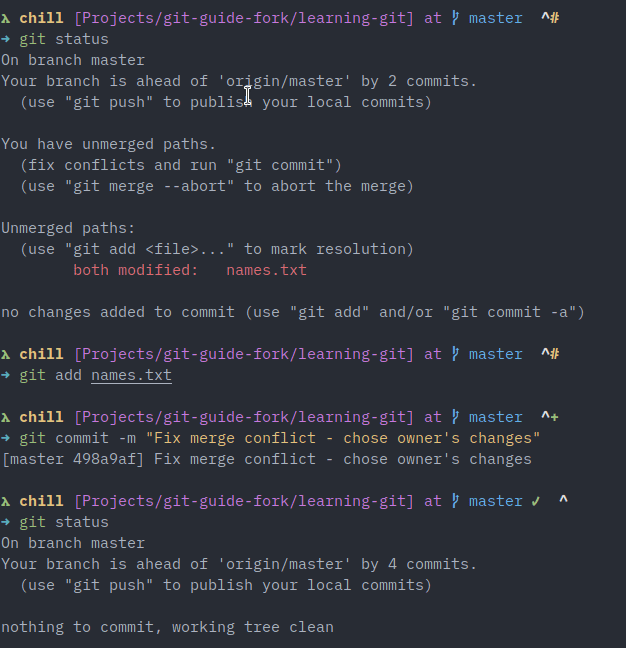 Rotate this exercise between your members and try modifying various lines of code at once and resolving the merge conflicts that arise. It is hard to simulate all environments where you may receive a merge conflict so it is crucial that everyone understands how merge conflicts can be resolved so that future even if the file contents differ.

For the owner of the original repository, can you figure out how you can receive a merge conflict even if you own the project? Think about this for a while and see if you can simulate this as well.

To cause a merge conflict on your own repository, you will be acting as member B in the scenario above and instead of pulling changes from upstream, you will pull them from origin.

Congratulations! You have come to the end of the core chapters for this guide!

To learn more about advanced topics, please refer to the GitHub repository for this guide here. More topics and erratas will be released there over time.

I wish you the best of luck in your journey to mastering Git!